Brucellosis is a bacterial disease that affects Yellowstone bison and elk. Extra precautions are required when field dressing and processing bison carcasses. The bacteria is concentrated in the reproductive tract and lymph nodes.

To protect yourself when handling your carcass, consider the following:

• Assume every bison or elk is potentially infected with brucellosis

• Avoid direct contact with materials from the reproductive tract or milk

• Avoid touching your eyes, nose, or mouth until you’ve had a chance to wash carefully

• Be extra careful if you have open sores or cuts

• Cook all meat that you are going to consume thoroughly

• Due to the threat of brucellosis, do not remove the entrails or reproductive tract of a bison or elk from the kill site.

WHAT IS BRUCELLOSIS?
Brucellosis is a contagious disease caused by bacteria called Brucella abortus. This disease infects domestic animals, wildlife and humans worldwide. In the United States, the primary livestock carriers of the disease historically have been cattle. The main wildlife carriers of the disease are bison, elk, caribou, reindeer, and feral swine. Elk and bison in the Greater Yellowstone Area (GYA) of Wyoming, Montana and Idaho are known to carry the bacteria Brucella abortus.

Although rare, brucellosis can also infect humans and is called undulant fever, Malta fever or Mediterranean fever. Once a person is infected, the disease can affect any organ or organ system of the body.


HOW DO PEOPLE OR ANIMALS GET BRUCELLOSIS?
In ungulates (hoofed animals), such as cattle, bison and elk, the animal becomes infected after ingesting or eating the Brucella organism. The organism is shed in birthing tissues and fluids, especially before, during or soon after an animal aborts or delivers live young. An elk that encounters an aborted elk fetus will instinctively sniff, lick and/or eat the infected reproductive tissues thus infecting itself.

People may become infected with brucellosis by coming in contact with infected animals and their reproductive tissues. The bacteria can enter the body through ingestion, contact with mucous membranes (e.g. eyes), through an open wound, or through intact skin. People who drink unpasteurized milk, or eat other dairy products that are unpasteurized, are at the highest risk for getting the disease. Other people at high risk include livestock handlers, slaughter industry workers and veterinarians. If properly cooked, meat from infected animals is NOT a health risk to humans.

Infected bison and elk may be a health risk for hunters who either improperly handle the carcasses or are exposed to birth tissues. The risk is greatest when handling infected females during their last half of pregnancy (e.g. February-June). There have been two confirmed cases of hunters contracting undulant fever from elk in the GYA, both in Madison County in southwest Montana.


WHAT ARE THE SIGNS OF ANIMALS INFECTED WITH BRUCELLOSIS?
In the field, elk and bison usually do not show any obvious signs of having brucellosis. After an animal becomes infected with the bacteria, the incubation time (the time between exposure to the bacteria and the beginning of symptoms) varies depending on how much exposure the animal had, whether or not they have been previously vaccinated, the species, age, sex and stage of pregnancy. Following a short infection, the bacteria usually collects in the udder and/or lymphatic system and, depending on the stage of pregnancy, in reproductive tissues. Abortion is a symptom of brucellosis. Other symptoms include retained placenta, reduced milk production, lameness, swollen joints, swollen testicles and reduced ability of females to become pregnant.

WHAT HAPPENS TO PEOPLE INFECTED WITH BRUCELLOSIS?
People infected with brucellosis can have many different symptoms such as weakness, lethargy, anorexia, fatigue, body aches, sweats and mental inattention. Other symptoms might include fever, swollen lymph nodes and occasionally an enlarged liver and/or spleen. Symptoms usually begin 2-3 weeks after a person becomes infected. In about one half of cases, the symptoms appear right after infection, while in other cases, symptoms develop over several weeks or months.
In people, brucellosis can affect any organ or organ system. Bones and joints are commonly involved and the lower spine often swells and is painful. Infected people can also suffer from painful, swollen joints in the shoulder, knees or hips. People rarely die from brucellosis. Life threatening conditions include infection of the heart valves or the brain. However, these cases are rare.

WHAT AREAS IN MONTANA, IDAHO, AND WYOMING ARE CONSIDERED THE GYA? 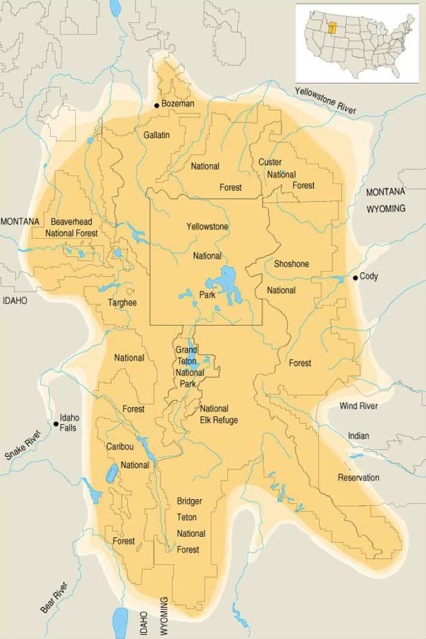 AS A BIG GAME HUNTER IN THE GYA, HOW CAN I AVOID BECOMING INFECTED WITH BRUCELLOSIS?
The chance of a hunter becoming infected with brucellosis is very small, especially if he or she uses precautions, such as wearing protective clothing and gloves, using care with sharp instruments and washing thoroughly after handling animal tissues. It is important for hunters to use gloves and other barriers when handling the carcasses of bison or elk. Disposable latex gloves are cheap, easy to find and easy to carry. They also make cleaning up after field dressing the animal much easier. Latex gloves should be included in your bag of “hunting essentials”.

In addition, when field dressing game, hunters should prevent their open wounds or mucous membranes from coming into contact with blood, reproductive tissues or other fluids from harvested game. Hunters should also avoid handling the reproductive tract or fetuses. And, as a general rule, hunters should not handle or eat animals that appear sick, regardless of the cause.

WHAT IS BEING DONE TO PREVENT AND ELIMINATE BRUCELLOSIS?
Idaho, Montana and Wyoming are all committed to eliminating brucellosis from their wildlife populations. Some of the ways that the states are trying to deal with the disease include:

~ Vaccinating-Vaccines are being tested on wild animals to determine how effective they are in preventing animals from getting the disease. Elk are vaccinated in Wyoming.

~ Habitat improvements-By using prescribed burns and other habitat improvement techniques, state and federal wildlife agencies are trying to improve the quality of habitat along the summer/winter migration routes of elk. These improvements can encourage elk to leave their winter ranges earlier and spread out from each other. When elk are more spread out, they are less likely to be in contact with aborted fetuses, which is a major source of infection.

~ Increased agency cooperation and public information and education-In 1995, the Greater Yellowstone Interagency Brucellosis Committee was formed. The committee is made up of several state and federal agencies that deal with brucellosis issues. The Committee works to share up-to-date research and management information between agencies and with the public.

WHO DO I CONTACT IF I HAVE ADDITIONAL QUESTIONS OR CONCERNS ABOUT BRUCELLOSIS?
The Greater Yellowstone Interagency Brucellosis Committee’s website has several related documents and links to other brucellosis sites:
http://www.gyibc.com/

Additional information, regarding Brucellosis, is available through the following agencies:
Idaho Department of Fish and Game:
http://www2.state.id.us/fishgame/fishgame.html

• Elk, not bison, have been linked to be the most likely source of transmission from
wildlife in the most recent livestock cases of brucellosis within the greater Yellowstone
area (GYA}.
• Brucellosis has only been detected in elk populations of southwestern Montana.
However, the increase in. brucellosis exposure rates (seroprevalence) in these areas has
not appeared to affect the elk population growth rates.
• The greatest risk of brucellosis transmission occurs during the third trimester of
pregnancy, which extends from mid January through parturition In mid June when elk
are on winter range or calving grounds.
• Montana Fish, Wildlife & Parks, initiated an enhanced brucellosis surveillance effort in
30 hunting districts (HD) within and adjacent to the GYA in 2008. This was initially done1
by collecting blood from hunter harvested elk, but did not provide researchers with an
evenly distributed sample rate throughout the targeted areas.
• MFWP determined that they needed a 5-year period to increase the efforts of their
study, with the goal to better understand the geographical distribution of brucellosis In
elk populations of southwestern Montana and to improve estimates of seroprevalence
where the disease was detected.
• During the winter of 2011-2012, approximately 100.cow elk were captured within
hunting districts 324, 325, 326 and 329. They were tested for brucellosis in. the field, 30
elk that tested positive and seropositve elk were fitted With a GPS radio collar and a
vaginal implant transmitter (VIT}, if they were pregnant.
• With help from the signals given from the VIT, samples were collected from birthing
sites or sites where elk cows had still born or aborted fetus. A small percentage tested :
positive for Brocella abortus biovar 1.
• This is a multiyear study project, where MFWP is dedicated to· using the best tools
available to determine the presence of brucellosis on the landscape in the GYA.